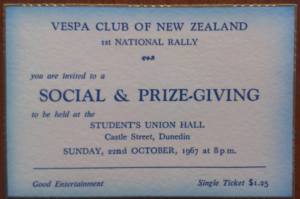 Report from the Rally Committee

The 1st National Rally has been held and we hope everyone enjoyed it. Organising such an historical event caused considerable thought to cater for the majority of members and to keep the standard reasonably high for future National Rallies.

The organisation started way back in March when the six of us got together for the first time to see what kind of form the Rally would take. We decided Saturday for the Navigation Trial, and Sunday for the Gymkhana and Prizegiving Ceremony.

The route was the next task. Maps were then spread all over Houston’s floor (trying to save the carpet!). We stared at them despairingly for some time never dreaming that so many roads existed in Otago. Then all of a sudden John started shouting out street names and poor Rosie trying desperately to write them down in time. John and Sandra decided to try out the route. This proved quite hilarious in parts, trying to read Rosie’s writing, noting new routes, taking mileages, average speeds; Geraldine (John’s wife) in the back seat rechecking everything and John thinking he was Sterling Moss driving down the Portobello Road. Consequently, both Geraldine and Sandra felt quite sick.

The rest of the Route was worked out in much the same way. Going over and over the course until just about every pebble was known. This took quite a time and thanks go to John whose car we had to use because at the time all the speedo’s of the other committee members’ cars were not working.

Thanks also go to Murray Brown and Errol Thompson for the use of their bikes.

The route then worked out, left us with the task of getting prizes sponsored, entry forms to be printed, instruction to be duplicated, hiring of a hall and 1,001 other things. John and Gary were left to organise the equipment for the Gymkhana.

At this stage we lost one of our committee members Ken Trevathan, who was busy with preparations for his wedding.

At last the great day dawned after a hectic week for us all. The number of entries was very disappointing but the keenness shown in those who entered made up for the loss.

Each bike was checked out at minute intervals and looking from Tahuna Park we could see quite a few baffled Vesparists obviously lost already, and only in the first section; namely a pair of twins who were seen going in the strangest places all throughout the day.

It was surprising to see one Sportique get up Dalmany Street two-up. The driver Ian T. and pillion didn’t seem at all surprised and with great calmness looked at the next instruction and went off leaving behind a shambles in Dalmany Street; bikes trying hard to get up solo leaving their pillions at the bottom or just dropping them off anywhere. Even the president, Derek, had to walk up!

In the afternoon at the fords very few riders tried out their brakes. Remember, this is most important.

After the last bike checked in at Tahuna Park we were able to pack up and prepare for the Gymkhana. The weather on Sunday made us transfer to the Drill Hall for the Gymkhana. During the afternoon we were kept busy and were not able to watch any other events.

There was not much dancing done at the Union Hall as everybody looked a bit tired and were quite content to sit and talk. The Mayoress was welcomed and presented the prizes. It was pleasing to see the happy look on the faces of the prizewinners and other competitors congratulating them. This proves the good sportsmanship that has always existed between the Vespa Clubs.

This ended the weekend for the competitors but not for us as there was still a lot of paper work to be done and other things to tidy up.

We enjoyed organising the Rally we wish the 2nd National Rally committee every success.