As of Feb 27th 2005 motorcyclists in New Zealand are permitted to use all bus lanes. However this does not apply to “Bus Only” sections of road as designated by the local council.

The following are Bus Only sections of road (not available to motorcyclists):

Where are they, and when?

Bus Priority Lanes – how they work

Yes the rider survived, but with serious leg injuries. 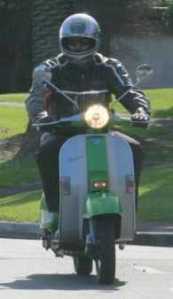 Just letting you all know and asking you to keep a eye out for my stolen PX200 Silver and metallic Green with reflective racing stripes. Stolen from Kelston, West Auckland.

We have another track day underway April 4 – again riding in the slow / novice class. Anybody interested to improve their time in an environment considerably safer than engaging the streets of Auckland City on a work day, should consider this great opportunity to improve skills and test your scoot in a legal manner.

Next session will be with kiwi trackdays – see their website for detail and to check what protection you must wear. Kiwi Track Days. Contact Michael Davies at Retroscooter or Kevin Golding at Scooterworld for more info. We hope to participate at Hampton Downs as soon as the facility is running.

Fellow Classic Scooter Fans,
It brings me great honour to announce an upcoming event that a number of the aged steel and (sometimes gears, lets not forget the Rabbits and the aged Jap Scooters) community has been working on.

On the 22nd of March, the same contributors that worked on the Waihi Rally and gave generously to the Child Cancer foundation and gave away a classic PX150 scooter, bring to you

THAT PRE 1979 CLASSIC SCOOTER SHOW – BRING OUT YA DEAD!

The concept is for something along the lines of the Hotrod Blowout that is hosted each year by the Scavengers. It is a classic only event that has a cut off date of 1979. The idea of this is not to be exclusive but to guarantee a flavour for the event. The show ground will be divided up into marques, years and quality as best we can. Of course there will be music and entertainment will abound.

So as not to exclude people who have that gem in their shed that they cant quite finish, we want to encourage people to bring their projects! This could include a Maico Mobile, a Heinkel Tourist, an Nzetta – who really knows? The promotion of the event has already begun on the scooter underground.

Judging of the show will be by peoples choice and of course there will be prizes on the day. Other things that we anticipate to include are a pinstriping booth, maybe some scooter inspired art or concept drawings. We would like to go as far as a scooter laid out in bits on a sheet, a sort of exploded diagram of a scooter.

So people, rally around, get inspired and join us at the Scooterworld carpark on Sunday the 22nd of March at Midday. Parking at the event will be strictly pre 1979, there is plenty of parking locally for the cars and trailers required to bring some of the trailer queens. Being a Sunday, we anticipate a great turnout, heaps of parking and great weather.

Come one, come all. Entry to the event will be by gold coin, and proceeds will help cover our costs and pay for the grand prize.

The Androidss – yes, with a double s, a set of twins and two brothers are back!

Don’t miss their one and only Auckland show on Saturday Oct 25th, at one of Auckland’s oldest standing Rock ‘n’ Roll venues, that’s right – The Kings Arms.

Christchurch punk band The Androidss formed in 1979 and last played Auckland in 1981 – 27 years ago! Some of you will remember them, others of you would not have been born yet, but the legacy of their hit song ‘Auckland Tonight’ and their punk attitude lives on in many of us.

It been 27 years since the The Androidss last played Auckland!

It is a show that me, myself Devil Doll is proudly promoting so pass the e-mail round. 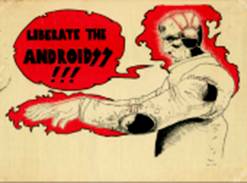 This band has a great and large repertoire of songs that were most unfortunately lost to history. A contributing factor to their history and lack of recordings was due to a couple of members doing jail time. However, ‘Auckland Tonight’ and ‘Getting Jumpy’ were the only two songs to have been recorded/documented/saved, thanks to Ripper Records.

Ripper Records being one of NZ’s most important record labels. Hell, it was only the first punk record label to have started up in NZ! The mastermind behind the label was Bryan Staff, who up until recently hosted a country music show on Radio Live.

World famous in Christchurch, this band was very important on the local scene for it’s melodic post punk Rock/Pop sound.

Don’t consider this a mere reunion show for the revivalists, this is a show to evoke and awake the punk attitude that so many bands and businesses have adopted today…Hallelujah!

This show will stand the test of time, with old favourites and new songs from their up coming album, or rather long awaited album. Incarceration can somewhat stifle productivity – 27 years in the baking!

‘Auckland Tonight is an under recognised New Zealand classic’

I never saw the Androidss perform live and never actually met any of the band members directly, so the band is a bit of an enigma to me, just their reputation and their music left to impress me. One band I really wish I’d caught live.’

Don’t be the one writing the above in years to come.

Saturday October 25th at The Kings Arms with support from;

Labretta Suede and The Motel 6